In a parallel universe, Black Widow would have been out for over a month now, and we would have been going crazy over what’s coming next in Marvel Phase 4. Instead, we have to wait just a little while longer to give Nat her MCU farewell.

From the looks of the teaser trailer released by Marvel, Black widow  is going to touch the family and past life of Natasha Romanoff. Finally! I always wondered about what made Natasha so…focused-almost-obsessed over her “job” at S.H.I.E.L.D. and Black Widow  is going to give us all the answers and hopefully interesting insights into Natasha’s past.

As for the much-questioned timeline, Harbour has confirmed to IGN that it, indeed, takes place between Captain America Civil War and Avengers Infinity War.

And my dear people Mr. Stark will be back in Black Widow 2. Yes, you heard it right! There is a prevailing belief that any scene involving Stark will, instead, come from a Captain America Civil War deleted scene that involves Iron Man telling Natasha to go into hiding. But we will be happy with anything regarding Mr Stark, won’t we?

Directed by Cate Shortland, Black Widow 2’s cast includes Scarlett Johansson returning as the titular character; David Harbour as Alexi; Florence Pugh as Yelena Belova, O-T Fagbenle as Mason, and Rachel Weisz as Melina Vostokoff(Iron Maiden). The Taskmaster will also be in the Black Widow movie, but we don’t know who’s behind the mask just yet.

With November’s release date closing in (late October, for the UK), it’s no real surprise that we’re bound to see more of Natasha.

Originally touted for May 1, cinemas closing down had forced Marvel’s hand. Black Widow is now taking up the Nov 6, 2020 slot, one which was previously reserved for The Eternals.

Not one, not two, but three yes three Black Widow trailers have been released, plus the Black Widow Super Bowl Teaser.

Fans who like been spoiled should be thrilled to hear that the entire plot of the movie and it’s two credits scenes have been leaked. While it’s not possible to verify any of the information at this time, we’d caution everyone else to avoid the spoilers below, as they might be real, including the first major plot twist of Phase 4.

Nat’s past has always been a mystery to us and Marvel is counting on that. Exact story details haven’t been revealed, with the trailers understandably not giving too much away. We can glean some story details, such as Nat working alongside previous Black Widows against a new threat led by Taskmaster, but that’s about it so far.

We already know the Taskmaster has claws akin to Black Panther, the archery skills of Hawkeye, and the shield technique of Captain America. 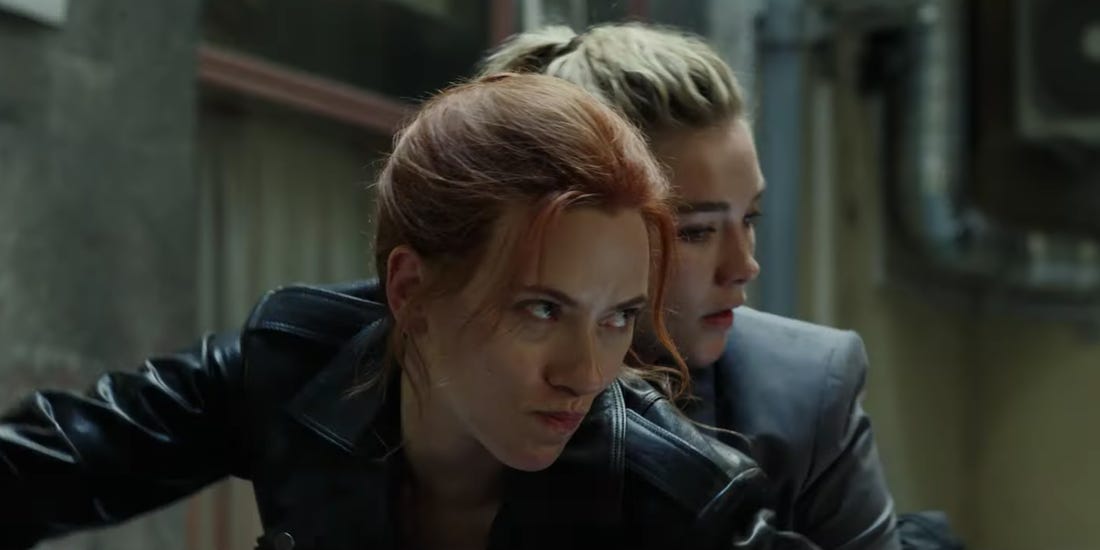 A leak suggests that Taskmaster will brandish his Pantera claws and references “needing to be nearly invincible in order to use them effectively.” Now, fans have long clamoured for the nearly invincible Wolverine to show up in the MCU. And not only Wolverine, reportedly, Deadpool and Nightrider too.

The details of the movie’s post-credits scene have also surfaced online. Reportedly, the post-credit will feature Jeremy Renner’s Hawkeye in the present standing beside Natasha’s grave with his kids. If the reported leak turns out true, the scene will confirm the exit of Black Widow in Avengers: Endgame and will also give the much-needed closure its fans have been asking for.

There is said to be another mid-credit scene as well, which could be a major plot twist in the storyline. It is reported that the scene will reveal that Yelena Belova was working with all along with Taskmaster. Betrayal in the house? If it turns out to be true, the scene’s implication could impact all of Marvel’s Phase Four films.

This brings us to the latest leak of Black Widow 2, which comes from 4chan via Reddit. It’s supposedly from a marketing team hired by Disney that was shown the film, as Disney has been looking at alternatives to make the most of a movie that would have likely been a box office blockbuster.

“Disney is in a real fuckin tizzy trying to figure out what to do with Mulan and Black Widow with all these Covid delays. They’ve been showing the movies to all sorts of different teams to see what the best way to recoup their investment is. My marketing team was one. I feel safe sharing this because of the sheer amount of people in this industry I know who’ve seen the movie.”

That being said, the leaker also says the movie takes off directly after the events of Civil War, as Black Widow is running from the government, in search of a device that would help Captain America’s team avoid detection. The same device that was previously used by Black Widows.

Yelena Belova, Nat’s sister, is the obvious destination for Nat, with her being the only family Nat had before the Avengers, and that’s how Nat will end up joining Melina and breaking Red Guardian out of prison.

Melina knows that Taskmaster, the villain is training a new generation of Widows. The consequent betrayals and twists have been revealed.

Share this article with a friend and let them know about the latest leaks and Stay tuned to The Hollywood Tribune for latest updates on Black Widow and more news from Hollywood and Beyond.