Pauline Jean’s latest song ‘Ain’t I A Woman (Singing Truth)’ released on August 6 and it is such a soothing one filled with the exact kind of energy that we need right now. The song opens up with a magnificent piano playing in the background, followed by her captivating voice that is etched with passion about black women’s rights.

What makes this song all the more special is that it was released on the 55th anniversary of the Voting Rights Act. The landmark federal legislation was signed into law by Lyndon B in 1965 and amended by Congress to strengthen the voting rights and its protection for racial minorities in the USA.

The title of the song mirrors the words of activist Sojourner Truth (Isabella Baumfree), as she describes racism that made the lives of black women almost fictional. At points, it even dives into the forgotten history of the role of Black Women in women’s suffrage movement. Jean’s song takes an unapologetic dig at the unfair ways in which Black women were treated.

We had the opportunity to talk to Pauline Jean herself and it was really inspirational to talk to her, to say the least. You can read the full interview below followed by a detailed review of her latest project: Ain’t I A Woman (Singing Truth)!

Tell us how you got into music and what started your musical journey!

My musical journey actually started when I was in church, you know, just singing with the choir, the children choir and the youth choir, and music was in me, so I ended up going to a high school of music and performing arts and I did vocal performance at La Guardia High School!

Tell us about ‘Ain’t I A Woman (Singing Truth)’, what went into making it and how the idea came to you!

I am a person that loves history and I love when there’s a story especially something that one can get inspired by.

Sojourner Truth, for me, is such a courageous woman so I actually paid tribute to her based on her memorable speech during the Ohio Women’s Rights Convention in 1851 because she used her identity to point out the injustices on Black Women in Slavery.

So, her mission for justice was so powerful that that’s what inspired me to write a song because not only does it bring awareness towards the injustices towards black women in slavery but it also generates voter registration and women in leadership. She was the pioneer of women’s rights and voting rights and for all those historical black women who never got the recognition for being very prominent during the Suffrage movement. So the idea for ‘Ain’t I A Woman’ came to me by just learning about the life of Sojourner Truth and you know, she was just an extraordinary woman, she just did extraordinary things and she’s just a woman who suffered throughout her life and she just inspired me and with that inspiration I wrote about her and all the things that she had to go through in her life: being enslaved, being abused in every way and just still having the strength to be able to stand up against it and actually try to do something about it by being the first woman to actually speak out against slavery.

Tell us about the artists you listen to and the genres that you prefer!

I love jazz, I love gospel music and you know, again, I’m really inspired by the legacy of my people, my African American roots and I just gravitate to anything that’s soulful, anything with a message and again, it just has to draw me. It just has to grab me and connect with me, which is what music should do.

So, you know, for the most part, I can’t really pinpoint a genre, per se, because anything that has the ability to capture my heart, I gravitate towards it.

What is it about Jazz that pulls you towards it?

I am a very historical person, and Jazz came out of history, and my family is from the Island of Haiti and when you think about the whole history of the Haitian Revolution and how from that revolution, the United States would be able to gain New Orleans and a lot of the musicians and a lot of the people were enslaved Africans and everybody went from Haiti into Cuba into New Orleans and that’s like the beginning of Jazz. 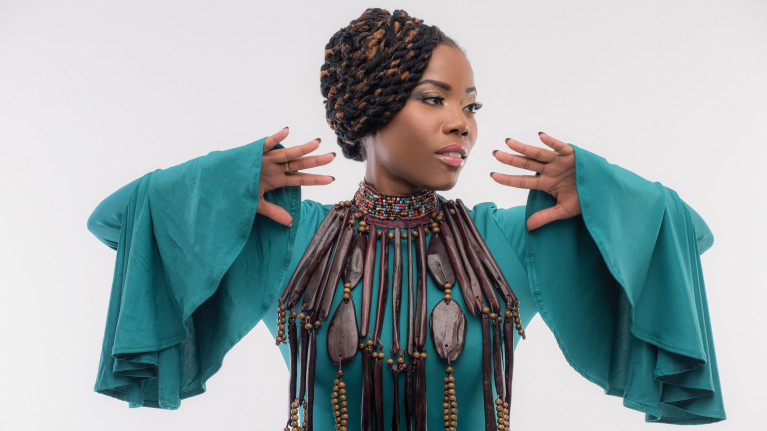 So, you know, the whole history connects me with the movement and the music and again, I just gravitate to it. And all kinds of Jazz, you know, the Blues Jazz, Swing, Be-bop, and so on and so forth. And it also comes from history, so that makes it all the more appealing for me.

What would you like to say to artists who have just started out in the music industry or are looking forward to?

I think you should know your worth and if you don’t know your worth, someone will determine your value and you can’t really give away your work for free, so you have to get some pay for time and talent but before you get paid for your time and talent, you have to make sure that you are honed into your talent and you are in tune with your music, you practice and you do everything that you need to do to just know what you’re doing and know your talents and gifts.

Educate yourself in financial and legal matters so, the more you know, the less likely you’ll be taken advantage of. If you’re not sure, seek wise counsel. Never sign documents prematurely and give yourself a day or two to review any document, at least a day or two. Lastly, never give up!

The song has strong and influential lyrics that remain relevant in 2020. The song goes on to question the norms about the way women are viewed by the world.

The purpose of this song is to highlight the way black women went unnoticed all their lives and it continues to be that way even today because they are looked at inferiorly.

The song brings attention to gender and racial equality, women’s leadership and the Voting Rights Act of 1965.

Jean also gets you to weigh the plight of women in her lyrics “…That man in black said you can’t have as much as me/ he said ’cause Christ wasn’t a woman and that was his logic you see…!” and gives a zippy response in the following “…where did your Christ come from? he came from God and a woman/ man had nothing to do with his son…”

A woman is so many things, a mother, a sister, a daughter, a wife, a working professional and so much more! She doesn’t just procreate life but she nurtures them throughout life. There’s much more to women than just their color, bodies and gender.

The video is directed and choreographed by Janet Huey. She gives life to the song with a ballet sequence that seems to be untouched by gravity. At moments, it feels as if the two performers are swaying, and they are soaring free without shackles they were bound by. The combination of the audio-visual elements makes this song hauntingly beautiful.

The tonality and pitch of her voice are just perfect and have us locked in since the very beginning.

The piano music is gripping as it sets the mood of the song. It also gives the song an impressive touch as it brings out the message even more strongly.

We really love ‘Ain’t I A Woman’ as it brings out the truth about black women and their representation in the world. The elegant audio-visual combination carries powerful imagery that bolsters the lyrics. A woman is fierce, she is divine, and she’s is equal to any other being who will fight for justice and equality.

Don’t forget to share this because everyone should listen to “Ain’t I A Woman” at least once. We bet, they’ll put it on repeat. And as always, stay tuned to The Hollywood Tribune for more awesome song recommendations, music videos and Exclusive Interviews of super-talented musicians and artists! For more exclusive content, head over to THT EXCLUSIVES and subscribe to updates!

Ain't I A Woman (Singing Truth) By Pauline Jean

We really love ‘Ain’t I A Woman’ as it brings out the truth about black women and their representation in the world. The elegant audio-visual combination carries powerful imagery that bolsters the lyrics. A woman is fierce, she is divine, and she’s is equal to any other being who will fight for justice and equality.